The high-speed rail in Hong Kong is an extension from the existing route in Guangzhou and Shenzhen, runs through several inner Chinese cities, and goes all the way to Beijing. The service officially began in late September, and I couldn’t wait to try it out as I visited Hong Kong during Thanksgiving.

Hong Kongers may not like China’s political motives behind building a high-speed railway station and a Chinese police station on the territory of Kowloon, but as a traveler I can’t ignore how convenient it is. There are some other border-crossing routes between Hong Kong and Shenzhen—one can take the East Rail Line to Lok Ma Chau (Futian) or Lo Wu, border-crossing buses via Shenzhen Bay, or the ferry from Central to Shekou. But all of these take about an hour and half to get you to the other side, and walking through customs is always a hassle.

The high-speed rail is much more convenient because it takes only about 15 minutes to get to/from Shenzhen. The train departs from West Kowloon (西九龍)—which is only five minutes’ walk from MTR Kowloon Station in Tsim Sha Tsui—and stops at Futian (福田, Shenzhen’s central district) and Shenzhen North (深圳北 Shenzhenbei). Travelers can clear both Hong Kong and China customs at West Kowloon Station, not unlike U.S. immigration checkpoints at Canadian airports.

I booked my ticket on Hong Kong MTR’s website. You can also book your tickets through Chinese sites, although there are two separate ticket pickup lines at West Kowloon Station and the MTR one is usually much shorter. Unless you are using a Mainland Travel Permit (for Hong Kongers and Macanese with Chinese citizenship) or a Chinese national ID, you have to pick up tickets at the counter.

Note: The MTR website says you can use a foreign passport to purchase tickets, but I discovered that Chinese passports work too.

West Kowloon Station is right out of Elements (圓方), the mall that connects to MTR Kowloon Station. Trains usually start boarding around 15 minutes before departure time, and immigration clearance takes time, too, if you are not qualified for e-Channel. On weekdays I’d recommend arriving at the station at least 45 minutes early. (If you are departing from Shenzhen, you don’t have to go through customs until you get to Hong Kong.)


There is not a single convenience store, restaurant, or café once you clear security screening. You’ll find a couple of duty-free shops between Hong Kong and China checkpoints.

The train—named Fuxing 复兴号—is just like other high-speed bullet trains in China. The 15-minute trip went by fast—most of the trip between Hong Kong and Futian was underground, but I was able to receive 3G signals while roaming on 3 HK. My Project Fi SIM stopped working once the train entered Shenzhen—although it worked well in the past—so I had to switch SIM cards last minute.

I did not take pictures of the terminus since nothing much was there, but you can find a few photos on Hong Kong Free Press (HKFP).

On July 4, The Washington Post published an op-ed headlined “China’s biggest cellphone company censors content — even in the United States,” revealing that users of China Mobile — a Chinese state-owned telecoms carrier — are unable to access websites banned in China while roaming in the US. The article characterizes the case as evidence of China’s deliberate meddling with America’s freedom of expression, warning against Americans becoming “accustomed to living in China’s world.”

The author addresses a valid concern: as the Chinese government willfully attempts to infiltrate US academia and private sector, American people and industries must be protected. However, the article overlooked a key fact: the Chinese carrier is simply abiding by common international roaming practices.

The LTE guidelines permit two roaming architectures. The home-routed model allows the subscriber to access sites through their home network, granting the home carrier more control over the end-user’s data traffic; the local-breakout model directly delivers services to the end-user, giving the visited network almost complete control over user data. The latter, albeit faster, is only used when a trusted partnership is present between the two operators.

China Mobile utilizes home-routed architecture for users roaming in the US, as do many other carriers — including T-Mobile, which allows me access to American websites while I’m in China. Because China Mobile’s home network is located in China, users cannot access blocked websites as a result — even when they are physically abroad.

If a close partnership is established between China Mobile and an American carrier, both parties shall adopt the local-breakout structure. That being said, the data traffic of American users will be subject to Chinese surveillance, which is an even bigger problem.

Chinese state-owned operators, including China Mobile and China Telecom, do sell SIM cards with unfettered access to Google, Twitter, and Facebook to Chinese expatriates through their respective subsidiaries in the U.S. (CTExcel) and the U.K. (CMLink).

The Chinese government’s political influence is undeniably growing, but the technical side of the issue should be investigated. At the end of the day, we must not let witch-hunts to distract us from the genuine challenges in the landscape of US-China relations.

Media outlets consistently refer to people with Asian full names in the Eastern name order (i.e. last name, then first name). I soon found that there was a reason behind this: The AP Stylebook, a grammar style guide which most American journalists follow, states that Asian (Chinese, Korean, Vietnamese) names should follow the Eastern name order.

While the Eastern name order is used in aforementioned native languages, things are different for Asian people in the West. Personally, I have always been bothered by this. In the U.S., Asians and Asian Americans today generally prefer using the Western name order (i.e. first name, then last name), even when their first names are romanized from an Asian language. So when I pulled out a news article that referred to me in the Eastern name order, I felt bizarre. In fact, I have never used the Chinese order to address myself in the English context.

So I asked a journalist. He told me that using Chinese names in the Western name order would be a form of racism, as white people don’t reverse their English first and last names upon arrival in China. I absolutely did not know I had been a racist – to myself – my entire life; how ignorant was I!

When one discusses racism, it is crucial to bring the context to the table. Things that are embraced by Asian people living in Asia might deliver offensive messages to Asians in the West.

After coming to the U.S. as a teenager, I decided not to adopt a Westernized name. As time moved on, I realized such decision had an undertone: by choosing Tianyu over Johnathan, I have kept my pride in my ethnic origin but lost an opportunity to make myself more American. However, I questioned myself, what constitutes an ‘American name?’ The eurocentric undertone beneath the widely-accepted interpretation that an ‘American name’ has to be Christian, European, or both, is often unaddressed. In other words, why can’t Tianyu be an ‘American name?’

My name was no longer merely Chinese, but also ‘American.’ I use the Western name order at school, at work, and on official documents. If so, there would be no point of spelling my name in a way different than John Appleseed’s.

I found out by chance an opinion piece by Michelle Tsai from the Slate from a decade ago. Tsai discussed media outlets’ choice of name orders when they mentioned Seung-Hui Cho, a Korean-American mass murderer who later committed suicide. Tsai wrote: ‘… Some Korean-Americans felt media groups were playing up Cho’s foreign-ness, according to the Asian American Journalists Association, which advised reporters to use the American [Western] order.’

The AAJA Guide to Covering Asian America states that while Chinese names usually follow the Eastern name order, ‘many Chinese Americans, however, change the word order to conform to Western practice.’

My suggestion is that journalists, writers, and Wikipedia editors should always ask and respect one’s preference. If Kim Jong Un isn’t Jong Un Kim, and Marco Rubio isn’t Rubio Marco, why would you rearrange the order of my names?

I was fortunate to be born in the era of the internet. I grew up hearing all the tales of Facebook, Google, Apple, and their founders… and of course, Tencent, Baidu, and Alibaba. As a child, adults often asked what I wanted to be in the future. I could not give an exact answer. So they told me, “why don’t you become an entrepreneur, like Jack Ma?” I thought it was a really good idea. But it wasn’t just me; almost every teenager had the same thought. Then at some point, everyone built their internet startup company, a lot of which got backed by VCs. Experienced as well as inexperienced VCs put their money into good as well as shitty products. The outcome dovetailed with a simple principle in the market economy: The shitty ones were worth nothing so they died, and the good ones survived. “That was a bubble,” people began to whine on the cyberspace, blaming “internet entrepreneurship.”

The Chinese government launched a campaign to promote mass entrepreneurship and innovation. A few of my friends bought the idea so they started their own business on the internet right away after graduation, and most of them did not work well. The problem is, many of them wouldn’t even be able to get a decent job in the career market. When others with better educational backgrounds, more extensive experience, and more professional expertise were struggling with their startups, my friends did not even get a chance to join the game after working for years. However, there were some companies did thrive when Chinese VCs were wasting their money on overvalued products: local ride-hailing app Didi Chuxing beat their US competitor Uber, and food delivery service Eleme became a billion-dollar unicorn. The Chinese startup environment has been turning healthier thereafter as both VCs and entrepreneurs began to understand what makes a valuable product.

Overvalued products are definitely bubbles, but without the trend of entrepreneurship, it would be impossible for investors and entrepreneurs to distinguish the good ones (probably < 1%) from all the others that are shitty.

Today, blockchain projects are facing the analogous problem. Kodak’s stock price skyrocketed as they decided to make its own blockchain product, although nobody knew exactly what the project was. Many people have realized the great momentum of blockchain, yet the vast majority of people do not understand how it works, and only very few people could see what some possibilities are. As a result of this mindset, investors began to make speculations and put large amounts of money on overvalued crappy projects (professionally known as “shitcoins”). So that being said, we are going to invest >99% in overvalued shitcoins, and <1% in good blockchain projects, and we are going to lose money. But the idea isn’t wrong, it’s just that it takes time for us to tell the goods and the bads apart. During another “trend” that took place around 1849 — the Gold Rush — people came to the Sacremento Valley in search of gold, but many people returned home with nothing and only a few people actually became wealthy. 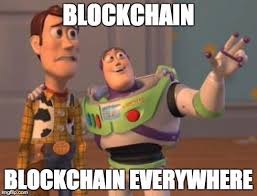 As entrepreneurs, it is also important to realize that strong trends are signals of change. Labeling yourself as a blockchain company will not prevent you from being knocked out, but ignoring emerging technologies is definitely not going to be a smart approach. If Sears had looked into e-commerce in 1993, it would probably have looked different today than getting close to shutting down almost all of their stores throughout the USA.

Edited 1/11/18: An earlier version of this post described Kodak’s blockchain project as a cryptocurrency. Thanks to Gee Law for pointing this out.